I wonder what I ought to tell you about the friendship there was between me and a falcon? —Carlo Carretto, I, Francis 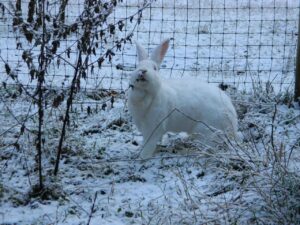 Last year, I completed a book. I am listed as the sole author, but the content and essence of the text were guided by a Rabbit. In many ways, the collaboration was no different than others. Diverse authors, including scientists, ascribe their discoveries to sources other than their own analytical operations. The fantastic science fiction of Felix Eberty sparked Albert Einstein’s theory of relativity. A coiled snake in the dreams of chemist Friedrich Kekulé led to his imagining of the benzene ring. Helen Cohn Schucman maintained that she played no part other than passive amanuensis for an unknown voice to create the dense spiritual tome, A Course in Miracles.

C.G. Jung and other seers attribute these exchanges to expressions of the psyche’s vast, fluid nature which is inextricably connected to the entirety of life. While the material world may appear as an assemblage of individual entities embedded in empty solitude, in actuality we live in William James’s world of accidental fences which, one by one dissolve into the authentic matrix of Nature’s unseen world.

Usually, when the word “Rabbit” or other Animal name is used, there is an intrinsic objectification and diminution. What is said or written is instantaneously subjected to a different set of inferences and judgments relative to those associated with humans. But as our species is slowly learning—whether from science’s admission of cross-species neuro-comparability, traditional Indigenous views, or personal experience—judgments based on externalities alone are misguided and incomplete. Fences might make good neighbors, but their separation is illusory. The ego is a remarkable magician whose masterful sleights of hand create interior and exterior barriers and boundaries which give the appearance of such solidity, such stability and permanence. Yet even the most seemingly impregnable walls inevitably crumble, fumble, and disappear into the dusty arms of mother Earth.

While my co-author navigated the world as a Rabbit, her form was only a medium of practical expression for operating in the material world. She heard and played life in the scale of Rabbit because that was how she was differentiated when she entered into form. Her life essence was communicated through a Rabbit interface of reflections and feelings much as mine enter through the form of human.

We spent twenty hours a day, side by side. For four years, we co-existed in what fifth century theologian Pelagius described, “the luminous pause between the two great mysteries.” When she was no longer able to use her back legs, we moved in together so I could provide her with what she was unable to do herself. Others knew us by our assigned names, yet we spent most of our time in life’s invisible reality. While they were intertwined in everyday tasks of cleaning, caring, and eating, our lives flowed and unfolded below the fractured, frantic waves of the materialed mind.

Her physical limitations were minor brush strokes on the limitless canvas where her lifelines were drawn. This boundlessness was extended to me. Each day, as she lay on the futon beside me, I read aloud what I had written as she diversely munched on kale, Italian parsley, cilantro, and wild blueberries which had become staples because of other health issues.

I do not think she understood individual words that made up my writing, but she understood the content and intent. She accessed meaning by listening carefully, fully present, her ears tuned to subtleties of rhythms, tones, and textures of phrases I spoke. The meaning was not only communicated to her verbally, but through embodiment. German philosopher, Ludwig Wittgenstein wrote, “The limits of language mean the limits of my world.” We became freed from this constraint because our language did not rely on words.

I was awed that she cared so much to push through my layered shell of human conditioning to the “deep I.” Her dedication was transformational for the both of us. She became almost translucent from the radiance that grew from within. Our coordinated internal shifts affected how we heard each other, our respective senses silently directing toward and sensitive to any subtle movement in each other’s field. I unconsciously and automatically adjusted my perceptions as I listened to her wordless reflections. My writing was fed in part by our interactions, but largely informed from the shared timeless space we occupied together. From here, thoughts would shape and percolate upward, differentiating as they entered into my human mind, finally rendering as words spilled out onto various pages.

She not only changed my life, Tommy changed my reality. She showed me that an individual self does not exist in the singular. While immersed in Nature’s beauty, humans egregiously mistake this diversity as difference. It is only when we understand that differences in form are nothing more than glove to hand, that the miracle of Nature’s magnificent splendor is realized. Beneath these dazzling forms is the one. The bodies we see and touch are merely diverse guises. When we gaze at the rugged face and torso of a hundred foot Ponderosa Pine and realize that his self is intermingled with our own, we are awestruck. This revelation is similar to the discovery that one is not a single Herring, but an entire school of Herrings, not one Starling, but the entire murmurating flock painting the sky. Our authentic self, the true self, emptiness, the Christ, Buddha nature, presence or however it may be described is, by definition, plural. “I” is indivisibly “we” and revelation, relational.