By Gay BradshawOctober 6, 2021October 17th, 2021The Tutortoise
No Comments 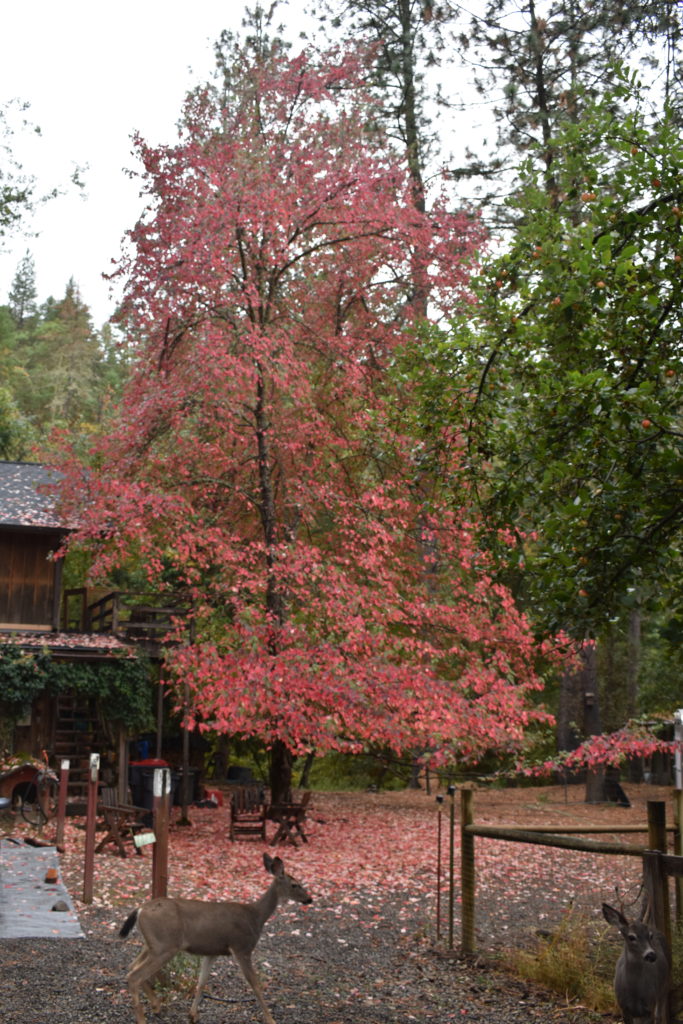 A Maple reaching more than forty feet stands just outside the studio. The tree is statuesque and elegant. Every year, as summer begins to wane, our game begins. I try and catch the Maple turning color. It starts off easy. For several weeks, the change from green to pink proceeds leaf by leaf at a measured pace. I keep a careful watch, checking every so often to assess the progression of color.

Then, suddenly, it happens. One day, despite my vigilance, I look out in dismay to find that the Maple has transformed from a green gown spattered with pink to a vestment colored entirely in the warmth of reds. It is another year of defeat. Disappointed, I concede victory to the Maple. I cannot help but detect a smile of satisfaction beaming from the delicate folds of her leaves.

The game with the Maple is a lesson in attention, and my lack, thereof. The Maple does not transform overnight. It only appears so because my attention has strayed. The tricky thing is, I don’t realize that my awareness has drifted away and that I have failed to notice the passage of time since I last scrutinized the Maple. The Tortoises do not have this problem.

You might say that they are ectothermically hard-wired to their surroundings unhampered by the endothermic buffering of our species. By the time I notice the Maple leaves turning, the Tortoises are well into their preparation for brumation (reptilian hibernation). They perceive the minute shifts in light which begin after Summer Solstice, what is imperceptible to the human eye or silenced by an overactive mind over matter.

Not all of the fifteen Tortoises respond to the seasonal shift in the same way. I think the differences derive from a number of factors—age, experience, and personality. Qaletaqa, who is thought to be the oldest, nearing 70, is a confident brumator. As the summer slides into fall, he moves in and out of his burrow, eats or does not eat, with military precision. Tangekwanu, on the other hand, is in his late teens. His regime is less routine, more tentative, perhaps because he was made captive before he could acquire the cultured assurance that Qaletaqa developed after years of living through temperamental climes.

States of health also play a crucial role. When they arrived in sanctuary four years ago, the Tortoises were in precarious health. The majority were “pulled” from brumation halfway through the winter because of poor health. During dreamtime, we quietly lift them from their hay filled hibernacula every two to three weeks to weigh them. If they are losing too much weight too fast, they are taken from their cool slumber, gradually warmed, soaked in rehydrating tepid water, and offered food. If this fails to brighten them, the Shelled Wonders are chauffeured for a medical exam and treatment. Last year was a good year. All slept through the six months and emerged ready to conquer the world.

You don’t have to be an ectotherm to hear Nature’s pulse. The Deer and Turkeys are as hot-blooded as any human, but are also skillfully tuned to the nuanced patterns of the wild. They have to be. Their lives depend on it.  So do ours.