Maurits Cornelis (M.C., as he is better known) Escher was a Dutch artist of the early twentieth century. Criticized for many years in art circles as being too “mathematical,” Escher’s work has emerged as an iconic deconstruction of dualistic reality. The woodcut-made-into lithograph, Relativity, illustrates. 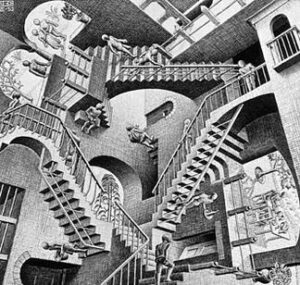 It shows a maze of staircases where multiple individuals are ascending and descending. At first, the exactness of the figures and architectural precision beguile the viewer into believing they are seeing a facsimile of everyday life. But closer examination reveals that the figures are moving impossibly perpendicular to each other, each subject to a different gravitational field. Perception and reality are destabilized. In his ink and watercolor, Two Birds, Escher treats the viewer with a palpable experience of this uncertainty and vertigo.

When the eye fixes on the painting’s white, it sees white Birds flying through a sea of patterned blue. In contrast, when the eye toggles and fixes on the blue, it sees the opposite, blue Birds flying in the other direction, leaving the mind taxed with wondering which is real. While the question may be dismissed as merely an intriguing sleight of hand in the realm of the imagined, a painting, ceramic, or other creation, as many artists insist, has meaning in (real) life. 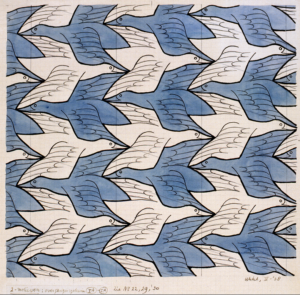 We experience this ambiguity when looking in the mirror. The face staring back holds the memory of the highs and lows, dramas and traumas of life. But, with a toggle of the eye, we are aware of and experience another self, simultaneously present. This “other” self is an inner witness who sees the face in the mirror but is not the face. Unlike the mirror self, the witness self is more like a catalyst, present and partner to life’s material processes, yet unchanged with time. Two selves, two realities or both in one? All of this comes into breathless focus when confronted with dying and death.

When the body of a beloved, their form that has ignited such joy, warmth, and love, begins to stumble, fade, and disintegrate, we are confronted with what appears to be a final ending, a ragged jagged discontinuity in the book of life. But, is there really discontinuity? Or as Escher’s visual koans suggest, are we failing to see the whole reality by focusing only on a piece? Are we failing to grasp life’s essence by limiting our attention to the water in a half-filled glass and ignoring the emptiness in which it is held? I think that the answer is “yes.”

When we are able to drop the conditioned crust that has hijacked and held human minds hostage for thousands of years and dissolve in Nature consciousness, the half becomes the whole. Trees are not graceful brushstrokes on a tableau, but living, breathing voices and arms speaking and reaching out to us. Deer, Bears, and Birds are walking, flying, testimonies full of rich and welcoming visions. We have shed and left the ego rumpled on the shore and joined into this river of the cosmos where stories never stop and lives never end.

Take a few minutes and stand in front of a mirror. Do you experience a “witness self” as well as a “mirror self”? Describe your experience and how they might be related in your life.

© 2023 The Kerulos Center for Nonviolence.