A s we saw before, moments of deep love can break through internal walls and release us from the ego mind. This story of Elephants and their human family shows how it is possible to live like this, without difference, and create a culture of oneness. 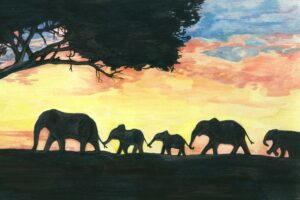 The David Sheldrick Wildlife Trust is located outside Nairobi, Kenya. For more than six decades, they have rescued injured and orphaned Elephants, now numbering over 260 individuals. After re-joining Wild herds, many have gone on to further revitalize their ancient culture by giving birth to infants as they once were. The vast majority of rescued babies would perish without the skills and heart of the Trust. Not only are their lives saved, but the sensitive and wise care developed by founder Dame Daphne heals physical and psychological wounds enabling the orphans to be reintroduced and become part of Elephant culture repair.

The Trust emulates the natal family, the nucleus of Elephant society, which is typically comprised of a leading matriarch and group of allomothers (aunties) who shelter and care for their own and other infants. From conception onward, the brain, mind, and ethics of an infant pachyderm are shaped not by one, but an entire constellation of Elephant minds and bodies. At the Trust, infant care is trans-species, made up of human and Elephants who recreate a natal quilt. The ties that bind transcend species.

Recently, three former orphans who previously had recuperated and rejoined other Wild Elephants arrived at the Trust. This in itself is not unusual. Often, many ex-orphans pay a visit and introduce their children to their human family. This day, Yatta, Chyulu, and Sidai, three ex-orphans now grown, came with their children, Yetu, Yoyo, Yogi, Cheka, Sita, and the newborn Silas. The Elephants’ visit, the Trust carers were soon to discover, was more than the makings of a baby shower.

Sidai had a poison arrow wound in her rump. The Elephants had turned to their human family for help in this life and death situation. Without medical assistance, it was likely that the poison eventually would kill Sidai. Immediately, medical care was mobilized. Despite being darted with a sedative that made Sidai lie on the ground, the other Elephants remained calm, fully cognizant of what was going on. They gathered round while Sidai received necessary care. Thankfully, the poison had not found its lethal way and she recovered.

In the wake of her recovery, Trust carers reflected on what must have transpired. While they showed great joy at seeing their friends, the Elephants were nonetheless “gaunt,” indicating that the family had travelled a great distance under hardship. The Trust carers deduced that the Elephant mothers had been challenged by a difficult decision—make the trek to the Trust for vital medical care or stay near a stable source of water vital to the vulnerable infants. The mothers chose wisely.[1]

There are so many layers to this glimpse of life, but perhaps first and foremost, the great love and trust the Elephants mutually share with human family and friends. Identity and self are unbounded by form, indeed beyond the concept of difference, a mental habit that is so deeply engrained in modern human culture, minds, and perception. We are literally programmed to see and judge immediately whether someone, something, is either this or that. This habit is not only unnecessary for living, it is also the root of widespread violence and suffering. There is a way, however, of perceiving and living without defining difference.

Accompaniment is how a Leopard Seal in the Antarctic attended to a human diver she believed was in distress.[3] Although she diverted precious energy and time to an unrelated species with no expectation of a “return on investment,” the Leopard Seal existed and acted beyond ego in the space of oneness. Similar to the Seal, the Trust carers and the Elephants were not reaching out to someone else, but to themselves. Elephants, Seals, and other nonhumans are born into and come from oneness. As American psychologist William James described: “There is a continuum of cosmic consciousness, against which our individuality builds but accidental fences, and into which our several minds plunge as into a mother-sea or reservoir.”