Brown Bears and the Inner Body

“Play was important for the cubs. Their world wants to be around play at that age. It was wonderful to be with them. They were always playing and you could not help but feel joy because of their joy. Their roaring around, chasing each other and jumping into the water – it was infectious. Just now, thinking of them, I can’t help but laugh. Once you are able to join them in play, it makes the world completely different. If you see Edge of Eden, like the part when I take the cubs sliding on the snow, they are watching me and trying to figure things out. They aren’t very coordinated when they get so enthusiastic and slide and jump in the air. First, when they try something out, it’s a serious attempt, then as soon as they feel reasonably safe, all hell breaks loose. They test themselves even further, like in the snow, trying out steeper slopes. When they do this, they become a deeper and deeper part of the world they were born in.” [1,2] 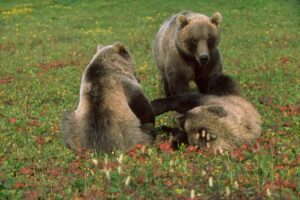 Charlie Russell’s snapshot description of young Brown Bears offers insights into both the cubs’ early experience and instruction on the inner body, the delicate interface between consciousness and the material form it inhabits. First, a little more background about the cubs.

After witnessing their mothers killed, the Brown Bear cubs (Eurasia’s counterpart of the North American Grizzly) were stuffed into cages at hunters’ homes or inside zoos. During his stay in Kamchatka, Russia, Charlie was asked, in appreciation of his decades-long experience with Bears, to rescue, rear, and reintroduce captive-held cubs to the Russian wilderness. Over ten years, Charlie squired ten cubs, not including those of a wild mother Bear who hired him to nanny her own while she went off to forage. [2,3]

As soon as their painfully etched fear relaxed into trust, the cubs looked to Charlie for the guidance and care that mother Bears provide. This schooling is conducted in the embrace of an intimate 24/7 three-year relationship during which cub minds and bodies are shaped to match the micro (interpersonal) and macro (wild society) settings in which they will live, raise families, make friends, and die. Critically, during this time, cubs develop ways of knowing and being – an episteme and ontology – which implicitly inform a code of ethics. This perspective is vital for understanding the nature of trauma and its healing.

When the cubs saw their mothers killed and were forced into captivity, in large part, they were not physically harmed. They experienced a deficit of nurturance physiologically, but the most formative assault was in the realm of the invisible. The young Bears were literally torn from the “world they were born into.” Shock and deprivation cut-off fluid access to the stream of consciousness springing from its source, the eternal, timeless, unmanifested. [4] Trauma is a cataclysmic breach of natural ethos.

In many cases, such experiences lead to the atrophy and desiccation of the inner body. The psychic tear and stranglehold of confinement are so profound that the captive is left aground, alone in the madhouse of the mind. Many others, however, such as Charlie’s cubs and the infant Elephants cared for by Dame Daphne, are resuscitated. [5] It was not only their needles of understanding and threads of love which Charlie and Daphne used to deftly sew back together the gaping wounds, but the ways and place in which this mending took place. The infants’ torn roots were re-planted in their native soil, their bodies and souls cultivated in harmony to “become a deeper and deeper part of the world they were born in.” [2] The image of Tree re-planting is apt.

Animal mobility plays a trick on the human eye giving the footed, winged and scaled the appearance of less rootedness than their herbaceous brethren and sistren. But while their bodies may move through sky, waters, and land, the Eagles, Salmon, and Bears of Kamchatka possess invisible connection to source as mighty as that of the Trees. Charlie’s inner shape-shifting to a surrogate mother Bear was successful precisely because of this intuitive understanding.

The exhilaration we hear in Charlie’s voice springs from his recognition that connection of the cubs’ inner bodies to source had been restored. The young Bears were re-inhabiting their bodies, the life force was visibly pouring through and invigorating their awkward developing forms. Their joyful play reflects inner revitalization. The “visible and tangible body is only an outer shell, or rather a limited and distorted perception of a deeper reality. In your natural state of connectedness with Being, this deeper reality can be felt every moment as the invisible inner body, the animating presence within you. So to ‘inhabit the body’ is to feel the body from within, to feel the life inside the body and thereby come to know that you are beyond the outer form.” [4] This is the world that the young Bears and Elephants were born into. This is the world to which we must return.

The path to Being begins with the path to being Nature. When we withdraw consciousness from the mind through Nature mindfulness, meditation, and prayer, we re-occupy our bodies releasing the revivifying flow of pure consciousness into outer form. By simply bringing attention to our breath, we touch into Nature consciousness and the stream of all life.