I’m going to die. Time is running out for me and for my companions,  my brothers of the river who, like me, were born in these waters four years ago…Our lives are coming to an end after a long, dangerous journey but we have made it here to the place where we first emerged into the world, the place where we have chosen to die.

This is the voice of a Salmon narrated in the documentary, Land of the Giant Bears. [1] After several years of living in the wide Pacific, the Fish return home to spawn, lay or inseminate eggs in the stream bed gravel where they were born. The journey is arduous and many have begun to die even before they give life.

Their bodies, weakened by labor and age, become splotched by skin-changing Fungi. Yet wherever they reside – from ocean saltwater, stream highways and byways, to reaches of tiny, natal creeks – the Salmon are home. An appreciation for the unity of Fish and water is reflected in the now popular phrase, “like a Fish out of water,” coined by Geoffrey Chaucer. The fifteenth-century English storyteller drew on our scaly kin to describe the extreme unease and awkwardness that we feel in unfamiliar, uncomfortable places or situations. [2] 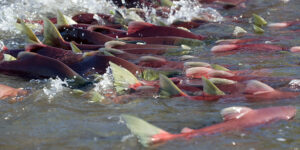 Certainly, the last legs of the Salmon’s journey home are physically uncomfortable. Their bodies are spent and natal waters often require deft navigation to successfully wind a way along the rocky spines. Indeed, there are many moments when they are “Fish out of water.” Salmon who travel up the creek running below our cabin are two plus feet in length. In many places, they are too big for the waters to cover. You can sense the Salmon’s relief when a glistening green pool is reached where she can rest and literally catch her breath. But, even under less stressful conditions, Salmon are in physiological tension every place they occupy.

They are anadromous, meaning that they are Fish who live in both salt and fresh water. In both cases, the composition of their environment is radically different than that of their own internal systems. On average, ocean waters are three times as concentrated with ions (salts) as the Salmon’s interior. In freshwater, the opposite is true. Creek waters are much more dilute. To thrive and maintain wellbeing in these environments, Salmon use osmoregulation.

Young Salmon emerging from their freshwater birthplace do three things: drink a lot of water, decrease kidney production of urine, and initiate molecular pumps in their gill cells which push ions (salts) out. [3,4] These processes reverse when the Fish return to freshwater. By this evolutionary magic, the Fish’s internal fluids retain a healthy profile. Salmon are a perfect illustration of Thich Nhat Hanh’s re-configuration of the Four Noble Truths.

These four truisms might be thought of as cornerstones of Buddha’s spiritual home: the existence of suffering, causes of suffering, cessation of suffering, and the way, or path, to cease suffering. Thầy (Teacher), as the nonagenarian is affectionately and respectfully called, suggests that instead of defining and describing the Four Truths in terms of suffering, we approach them from the perspective of wellbeing. “Even Buddha and Bodhisattvas suffer, but the difference between them and us,” Thầy explains, “is that they transform suffering into joy.”[5]

We see this miracle every moment in Nature. Salmon retain wellbeing through physiological transformation of chemical compositions, which would otherwise cause them great suffering and death, into solutions perfectly tuned to their internal needs. Every undulation of the Salmon’s body and fins is flawlessly aligned with the lines of moving water. Inside and out, the Salmon follows a path of wellbeing. Even when stretched out on the rack of pending death during the last moments of the spawning journey, Salmon stay the course of wellbeing. Suffering and death are synonymous with joy and life.