A story told by Death: There was a merchant in Bagdad who sent his servant to market to buy provisions and in a little while the servant came back, white and trembling, and said, Master, just now when I was in the marketplace I was jostled by a woman in the crowd and when I turned I saw it was Death that jostled me.  She looked at me and made a threatening gesture, now, lend me your horse, and I will ride away from this city and avoid my fate.  I will go to Samarra and there Death will not find me.  The merchant lent him his horse, and the servant mounted it, and he dug his spurs in its flanks and as fast as the horse could gallop he went.  Then the merchant went down to the marketplace and he saw me standing in the crowd and he came to me and said, Why did you make a threating gesture to my servant when you saw him this morning?  That was not a threatening gesture, I said, it was only a start of surprise.  I was astonished to see him in Bagdad, for I had an appointment with him tonight in Samarra.   -Somerset Maugham 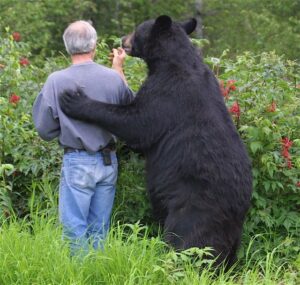 Humans kill Bears for the same reason that the merchant’s servant tried to escape to Samarra, an unconscious story line rationale, “Maybe if the Bear is killed then I can escape Death.” Why else? Very few people have ever seen a Bear – or if they have she is on television, YouTube. or sighted during a vacation to Yellowstone National Park, Gästrikland, Sweden, or some other exotica.

Nearly to a one, today’s humans are terrified of Bears. Yes, Bears can harm and even kill a human. But, they don’t do what would be easy for them to do and when they do, the numbers are minuscule. Statistics alone show that taking a shower or driving a car is the surer path to death. These everyday tasks should strike terror in our bones because the threat of slipping, falling or crashing is so great. Furthermore, when a Bear does harm a human, the circumstances are so extraordinary that is accurate to say that fear of Bears is a culturally conditioned delusion unfounded in reality. The extraordinary circumstances are those to which Bears are subjected.

PTSD is a natural response to unnatural conditions. Bears have no food and no way to make a decent natural living. On top of climate change which has forced Polar Bears to leave their icy homes into bare land, Bears must live as refugees. Not only is there ruthless, rampant hunting, in many places using Dogs with GPS collars while hunters sit inside drinking and waiting for the Dog to tree the Bear, at which point the killers can comfortably amble out and, with the nonchalance of a Hollywood starlet stripping, pick up their gun and shoot the despairing Bear. During the drought here in Oregon, Bears, driven to towns and streets in desperate search for a few gulps of water, are shot on sight. Wildlife agency personnel say they will relocate the Bear but, in most cases, the Bear is shot and dumped. There is another dark underlining to the story here.

While teaching courses on how hunters can bait a Bear to make their stalking and killing easy, Wildlife “services” actively discourage any other human-Bear contact. Humans who dare to normalize relations with Bears are penalized to the extent of jailing. The reason is clear: if the public learns the real truth about Bears, Cougars, and other Wildlife – lose their fear and begin to feel the natural kinship and empathy with Animal kin – Wildlife services will lose revenue. Hunting and Fishing fees are a major source of salary and research funding.

As the tale of the servant in Samarra shows, none of us can escape Death. When we watch a Bear, Cougar, Racoon, Skunk, or other “pest” killed, there may be a moment of delusion that we have escaped Death, that we are in control and masters and mistresses of our fates. But, what we have really done is hasten our own demise. Killing an Animal kills our souls, kills the Earth upon whom our lives depend.

When we are born, we are gifted with an incredible opportunity: to fully embrace the inevitable passing of our material lives and, brimming with effervescent love and fearless joy, dance with our Animal kin in wild abandon. This is the true lesson of Samarra.

© 2023 The Kerulos Center for Nonviolence.