The Science and Philosophy of Charlie Russell 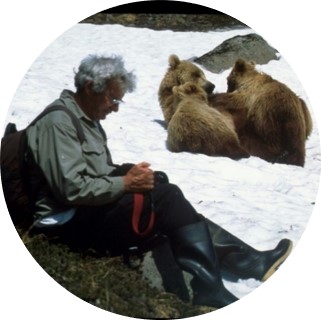 To make a secure credit card transaction via PayPal, please complete and submit the form below. Registration gives you access to the full course.  Access information will be emailed to you as soon as possible following registration.

S ince white settlement of North America, Grizzly Bears have been feared as unpredictable, dangerous misfits. This image has led to their near extinction. Now, formerly a stronghold for trophy hunting, British Columbia has banned Grizzly hunting and established the first Grizzly Bear wilderness sanctuary. Charlie Russell was a chief architect of this change.

This six-part webinar series explores the philosophy and science of this remarkable man and how he was able to live peaceably among Grizzlies for the seventy-plus years of his life.  Building on Gay Bradshaw’s new book Talking with Bears: Conversations with Charlie Russell, we delve deeply into the lives and minds of bears through the lens of Russell’s experiences. Through lessons from the bears, we hear voices of other teachers who advocate for the embrace of a new, but ancient, way of being—what Richard Rohr refers to as nondual thinking, Eckhart Tolle, presence, Thich Nhat Hanh, loving kindness, and quantum physicist David Bohm, wholeness.

Join us as we step beyond the awesome fascination of Bears and Charlie to look “under the hood” to study his theory of Nature and how he came to understand Bears the way he did.