Empowering Youth to Change the World for Animals 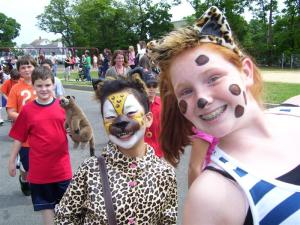 Over 400 children at East Rockaway’s Centre Avenue School celebrate a Walk Like the Animals Walk-a-thon.

Children are changing the world for Animals.

Plant-based eating, Animal-free product testing, zoo closures— huge changes in human culture are happening every day and children are key to this evolution. We work with teachers, schools, and families to create education resources that provide children with opportunities to experience  trans-species living.

The Kerulos Center facilitates Allarekin! Nature Events in public schools, including The Kindest Show on Earth, Walk Like the Animals Walk-a-thon, National Bird Day Celebration, and Pirates of the Carrot Bean Banquet. These educational materials and videos are translated by our wonderful Spanish, Chinese, and Swahili professionals.

The Kindest Show on Earth 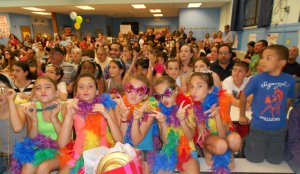 The circus is a centuries-old custom enjoyed by families around the world. But today it is recognized that the animals used in circuses — Elephants, Lions. Tigers, and others — suffer terribly. In conjunction with Long Island’s Centre Avenue School (grades 1-6) in New York, The Kerulos Center created and produced an alternative family event that celebrates what the children called, The Kindest Show on Earth.

For four years, we have worked with the school to put on this children’s talent show where each student has an opportunity to dance, sing, juggle, play an instrument, and engage in other fun things for their parents and community.

Kerulos provides educational materials related to wildlife and nature. Funds raised provide support for the children to attend a summer environmental education camp. The Kindest Show on Earth has been wildly popular and soon will be extended to neighboring middle and high schools. In the not-too-distant future, The Kerulos Center will be bringing this beautiful event to our local Southern Oregon.

Children at East Rockaway Centre Avenue School and Kerulos faculty stepped into the shoes of the Animals by holding a Walk Like the Animals Walk-a-thon. Over 400 students and teachers dressed like their favorite animal and “walk the walk” to make a change for all animals. They made banners and artwork and marked out a quarter-mile track on the playground and gathered together to walk the track using the information below to calculate the correct number of steps:

One-fourth mile is about…..

Funds raised by the children sponsored by their families, friends, and neighbors support The Kerulos Center for Nonviolence in saving African Elephants and the traditional communities with whom they live. Read more about this and other events at Centre Avenue School here and here.

Pirates of the Carrot Bean Banquet

Saving the planet includes healthy living. We sponsored a raw food chef to teach children how to make tasty healthy food and snacks.

The children were taught about the nutritional value of the vegetables they prepared and tasted and how they could make these for their families too.

The Declaration of Love

When, in the course of human events, it becomes necessary for children to dissolve the artificial line which separates all beings from one another, and to assume among the powers of the earth, the equal station to which the laws of nature celebrate all earthlings as divine beings, a decent respect to the opinions of children requires that they should declare the causes which impel them to reject animal cruelty, domination and captivity.

We hold these truths to be self-evident, that all animals are created equal, that they are endowed by their creator with certain unalienable rights, that among these are life, liberty, and the pursuit of happiness.

That to secure these rights, laws and policies must reflect the scientific data that is irrefutable. That whenever any policies become destructive to these ends, it is the right of the people to alter or abolish it, and to institute new laws, laying its foundation on such principles and organizing its powers in such forms, as to them shall seem most likely to effect safety and happiness for all species. We, the children, refuse to allow the long train of suffering and abuses to continue. It is our duty, as the future guardians of our planet, to throw off laws that allow suffering, and to provide new guards for their future security. Such has been the patient sufferance of these animal nations, and such is now the necessity which embraces a world where animals live in dignity and freedom. The history of the treatment of our kin under skin, fin, feather and fur is a history of repeated injuries and usurpations, all having in direct object the establishment of an absolute tyranny over animals.

To prove this, let facts be submitted to a candid world.

Our current laws do not reflect scientific knowledge of animals as sentient beings deserving of self-determination.

We wish to end the senseless destruction of habitats and homes; the cruel practice of enslaving animals for entertainment; and the unjust treatment of animals as commodities.

We, therefore, the representatives of the future, appeal to all children to unite with every family, herd, pact, flock and school to create harmony, peace, and respect for all species on our planet.